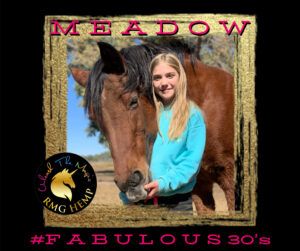 We decided that we can’t keep all of this girl’s fabulousness to ourselves!  She is famous in her own right, at Rocky Mountain Girls Ranch!  Collectively we (Misty, I, and all of our kids) decided to have faith for this senior mare, open the barn doors and believe for a God plan to unfold for her life, which was at stake.  It is heart breaking yet understandable, at the same time, that a beloved horse would face euthanasia in her golden years vs. the owner sending her out into the unknown future that could lead right to auction and or a horrific end at slaughter.  This girl has a story to tell, it’s a great one.  She has so much personality that we have to share.  She made it clear, over her last 2 years at Rocky Mountain Girls Ranch, that she only needs an open ‘bedroom’ door (gate)… and a lot of other things!  She will brighten your day as she does each one of ours here at Rocky Mountain Girls Ranch.

I excitedly wrote the above intro paragraph months ago.  I had planned on sharing about her antics at the ranch.  I (we, Francis and Arellano families) had looked forward to so much more time with Meadow.  We had to say goodbye to Meadow on Monday, August 24th.  She was 31 this year.  Her body did not give out, but multiple blockages in her large intestine forced us into a whirlwind of heart-breaking emotions, gripping a decision to see her not suffer.  She was not a candidate for surgery. 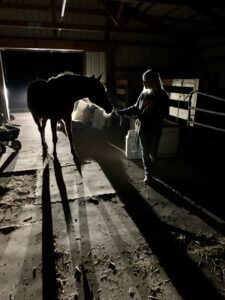 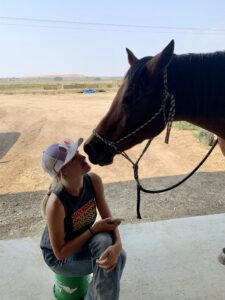 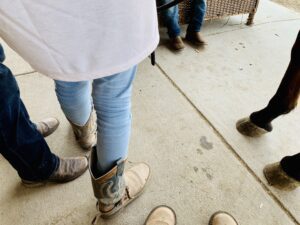 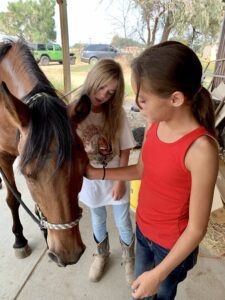 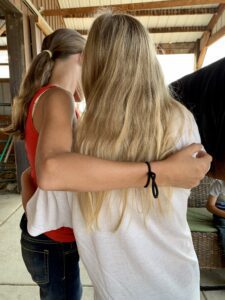 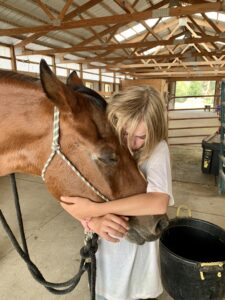 Her story is one of hope.  A gift that keeps on giving.  Horses have purpose in God dreams, no doubt.  Her story wasn’t done, but her owner, who loved her deeply, could not care for her any longer.  Misty and I were captivated by a Rescue fb thread about her situation two years ago.  It was dire, she would be euthanized if a rescue could not take her immediately. Not one rescue that had been reached out to could say yes, they were all beyond capacity.  Misty, I, and our kids collectively decided. . . Why not Rocky Mountain Girls Hemp!  We surely have faith to take on one rescue!  We were so moved to do this!  We were told Meadow was lame, and only had front teeth requiring mash with senior feed and some of the leafy parts of alfalfa (She came with a heart poured letter letting us know what she liked to eat, soon we would find out just how important it was to get her meals just right!).

She had been abandoned by her first owner at a barn she boarded at, then became a lesson horse there, then adopted by her previous owner for the next 10 years of her life.  In the fall of 2018, Meadow arrived at Rocky Mountain Girls ranch, was evaluated, and prayed for with 7 sets of faith filled hands!  We found her to be sound.  She was very emotional about her new surroundings, she was sad; it was obvious to us she was depressed.  She knew and we knew that we weren’t making her food the way she was used to, and or she just didn’t want food.  She would paw, and dump over the soaked timothy pellets and senior in protest of our efforts.  She just seemed so sad!  Eventually we thought we had the right mix, consistency, she was actually eating all of her meals!

Meadow (Farra had given her this new name) began opening up to each of us!  We ALL fell in love with her.  My daughter, Farra loved riding her.  We didn’t “need” another horse; but could not say no to keeping her forever!  Although she officially belonged to the Francis family, we all knew she belonged to all of us (Arellano & Francis families) in heart. 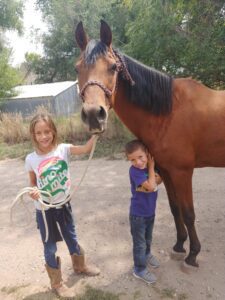 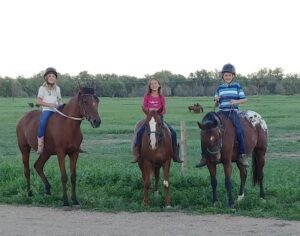 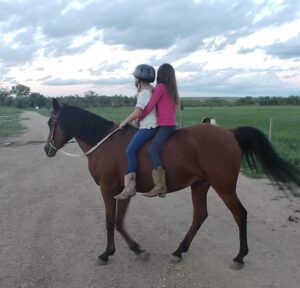 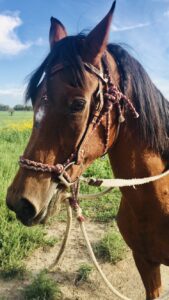 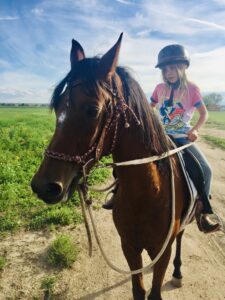 Yes!  Those are sparkles on her forehead!  The winter of 2018-19 was difficult on her and our collective efforts (Thank you Beau & Misty for your hot water and muscle!)  Misty and her son, Beau, would either soak for me and put a bucket on their porch or allow me to come in and use their hot water, and many days they delivered mash in the mornings!  They love Meadow too, she has this way of making you feel incredibly important to her.  She needed the food through the coldest nights to help her stay warm, cold wet food is complicated in freezing weather! 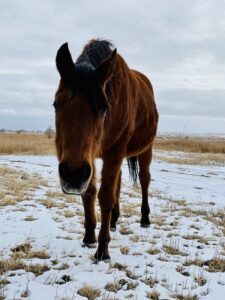 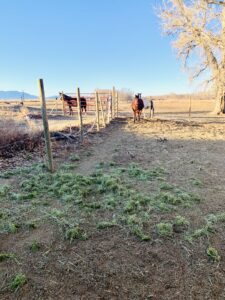 She never seemed satisfied with her meals!  Even when she ate everything given she still pawed in slow motion at the fence, eyes locked on you, low gentle knicker.  I tried different grass and alfalfa hays, she would leave little cudd balls of hay in piles.  It just seemed sad that she wanted so badly to chew hay and had to spit it back out.  Then we found great satisfaction for Meadow and us!  We met Mary Carson, and her Hay Saver Pellets and Omega Cubes!  Meadow loved them so much!  She was finally happy about her food!  We didn’t have to soak mash anymore either!   Don’t get me wrong, she still loved to chew on hay and spit those hay balls out everywhere she visited!

I need to share about this “visiting” that she did!  We had a few incidences where Meadow cast herself and they were close calls to her life.  She wouldn’t eat hardly anything, she wasn’t herself after the second time.  I decided to let her out of her pasture to brighten her days and let her find what she thought she needed.  It worked!  She made friends all over the ranch, the pony pasture was great for sunbathing next to Twinkie.  The “Big pasture” was perfect for showing off that she was free and could take a dust bath shamelessy right in front of them ALL!  The boarder pasture, and Mama’s pastures were wonderful for some shade, always a large open bale of hay to tare up, and lots to check out!…mustangs to get to know too!  She was not beneath trying to steal a new foal or two either!  She loves the babies and would even bag up when mom’s were near delivery, just incase! She was never mean to other horses either.  The barn held an open bedroom policy (she knew this was her double wide stall, her safe place during high winds gusts, lighting, hale, thunder, freezing winter nights…it was always stocked with her favorites and a plump hay bed for those old joints!

Speaking of old joints, we had a few bouts with her not being able to get up and shaking during the winter nights and mornings.  I was told bute was our only hope at this age.  I realized that I had been putting her hemp in her hay saver, and decided to give her about 75-100 mg a day vs. 25 mg, also to make sure she ate 50 mg of hemp from my hand before leaving for the night, and then hiding another 25-50 mg in her her haysaver for additional help in the wee hours of the morning.  This change plus making sure she had thick straw pallets to sleep (she loved them!) in made all the difference in the world!  She was doing fabulous!  Bute was not needed, she no longer had trouble getting up or eating, her world was a perfect one at this point! 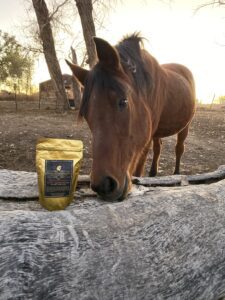 She would have sleep overs in the barn with Misty’s two blind horses during bad weather.  The mornings after she would follow Misty and her two horses up to her her house and their pasture, have a sleep over with them, and then wait at their gate when she was ready to go back “home” to her other friends at the barn!  If she was visiting down below the barn and would see our car coming, she booked up to the barn to meet us and get some lovies!  She polished the entire back of my car with her adorable whiskery lips.  She would follow Fallon with her training horses as if she were tied to to the trailer, then go right into the arena with them for some work!  No matter what was happening, if she was out of her pasture and you were gathered having a conversation, praying, mucking stalls (inspecting them was a Meadow favorite), riding…she was right there!  Just listening, being part of what’s going on. 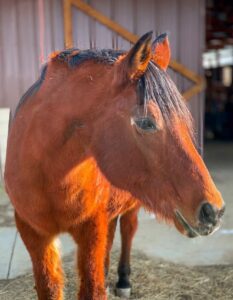 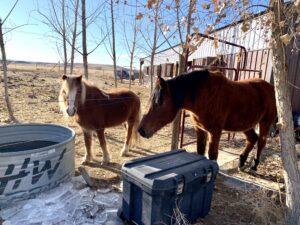 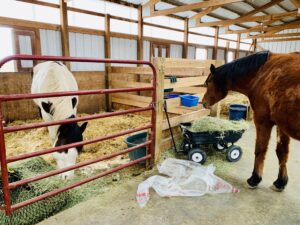 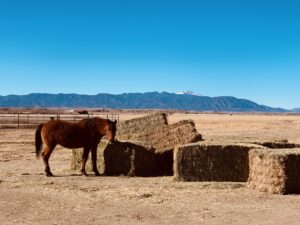 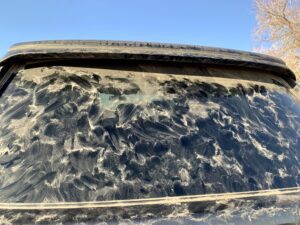 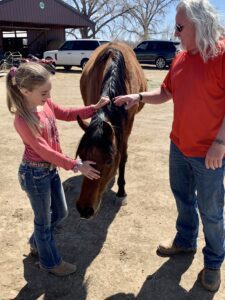 What I am about to share is very intimate and I would not normally share the following pictures, but they portray what I have been trying to say about Meadow in a way that I cannot unless you have witnessed her life for yourself.  My little dog had not been doing well, and he loved being at the ranch and hadn’t been able to come for some time, so I decided to take him to get some love from the Arellano family and see the horses.  Meadow would not leave us, she must have known.  It was right after the Arellanos had all told Jasper how happy they were to see him, and how much they loved him… Jasper’s heart stopped beating right in my arms…Fallon happen to be taking pics, and I took him into the barn and as you can see from the cherished photos, the true picture of Meadow unfolded as she gently touched Cruz when he was crying so hard in his moms arms, she stood by me and my broken heart, I cannot explain more so than the photos do below. 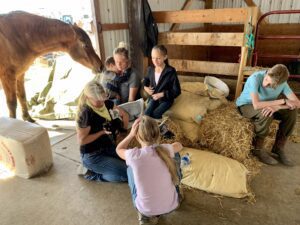 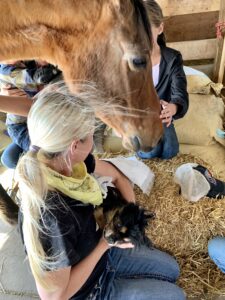 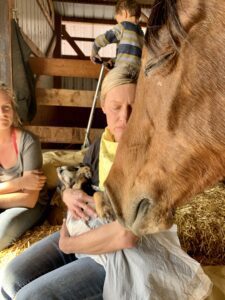 Our hearts are tied to her forever.  Thank you for reading about Meadow’s life, allowing her into your world today; she’s free to run as far as she wants.  Maybe her story will give another senior the chance to stay a little while longer too. 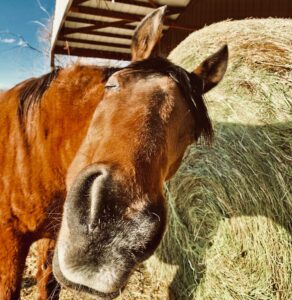 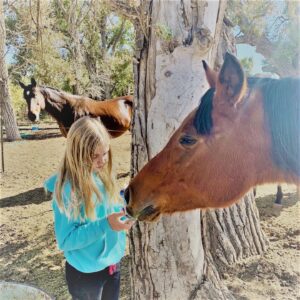 Sweet girl, we miss you every day, see you and Jap there. 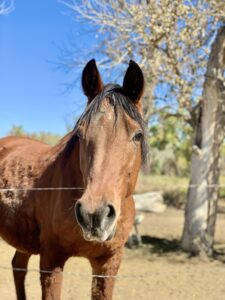 shortly after we had laid Meadow to rest.

God was there helping us to navigate those 48 hours of emotions and decisions,

and He was there to welcome her into His Kingdom’s gates.

Watch the following video and Celebrate with us Meadow’s life!  Barely does it touch all of the video and pictures We have of this girl…the song says so much.  Thank you to all the rescues that send out an army for the silent SOS of thousands of horses.  God does know.

What are you looking for?